We all know Cruella Deville prioritised fashion over animal welfare but it appears the world is breeding its own form of Cruella Deville’s, passing themselves off as fashionable celebrities. Paris Hilton takes the number one hotspot owning animals from as normal as puppies through to monkeys and ferrets; all of which spend the majority of their lives stuffed into her handbag with The Only Way Is Essex’s Arg and Lydia taking a close second when painting the toenails of their pet pig.

Paris Hilton’s latest endorsement, with many other celebrities jumping on board, is the infamous ‘micro pig’. The pint sized farm animals are man’s new best friend, but aren’t they something you pass in a field in Lancaster, not something you pick up and kiss on the nose? As cute and tempting as they seem, pigs are not domestic animals. Despite their reputation they are very clean, but are also very social animals and prefer to be brought up with a companion and a lot of space, not dressed in a diamante encrusted jumper at the bottom of someone’s purse.

But creating a miniature version of an animal we have heard of, and then slapping a designer price tag on it, appears to have people reaching for their credit cards. Much like micro pigs, teacup puppies are now a growing trend in the US. These puppies, named ‘teacup’ due to their tiny size, grow up to weigh no more than 2 – 3 pounds, less than a bottle of Evian from Sainsburys. However the problems these puppies come with aren’t quite so small. Teacup puppies are bred from premature dogs, creating a host of health problems with some not living past 2 years old, not to mention how fragile they are; just jumping off the couch can end in broken bones for these tiny pets. But still they are being sold for up to £2,000 with breeders popping up everywhere.

The price tag isn’t just attracting celebrities either. It appears there have been many cases of people being sold miniature pets for a not so miniature price tag only to have them grow full sized, which in the case of a pig is about 250 pounds (quite a substantial amount heavier than a 6ft tall man). 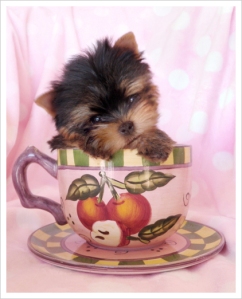 The idea of a tiny pet, if they do in fact turn out to be tiny, I must admit, is very endearing. If I am being completely honest I own 2 or 3 outfits for my border terrier Toby but, despite the fact they make him look adorable, when he wears them he spends most of his time stood completely stationary and the rest of the time trying to get them off. The truth is Toby, and any other pet, would rather be outside rolling in something we wouldn’t even stand near. So if you fancy researching or even owning a micro pig, a teacup puppy or even a ferret, keep in mind they are more similar to a baby than a fashion accessory and most of them would rather chew on your handbag than sleep in it.